An Interview with a Vamp– I mean Anne Michaud 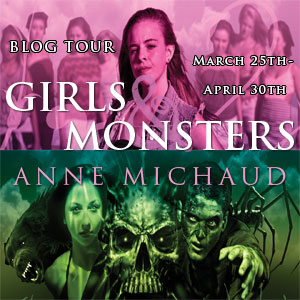 My good friend, Anne Michaud, is jetsetting around the world on a blog tour for her brand new book, Girls & Monsters. She’s been kind enough to include me in her tour and we spoke about her experience with the publishing world and writing in general…

AS: Why write about girls and monsters?

AM: I had a bunch of short stories that were supposed to be published in anthologies that never saw the light of day and others that had been rejected on claims they didn’t feel finished. Instead of working on them in their original shorter forms, I decided to regroup them into one collection and lengthen them to novellas, exploring each character and their monsters on another level. As I was working on those five stories, I quickly realized the two main themes were girls and monsters, so I found my title, too.

AS: Why did you choose the monsters you did? Without giving anything away, how do they enrich the narrative discourse?

AM: I wanted the monsters to feel real and yet be super different from one another, and although some came out of my dreams, I dug a little bit into my old journals as well. I chose my monsters before choosing my girls, I’m not going to lie. And I really wanted the monsters to be as important as the main characters, even if they don’t get as much page-time. So obviously, the monsters dictated how I developed my characters, my plots and my worlds – everything was according to them, who they were and what they wanted, which means the title should have been Monsters & Girls, really.

AS: One of the main themes running through most of these stories is how family can be our savior or our downfall. Why is this an important subject to you, and how does it inform your writing?

AM: While dealing with make-believe monsters and dark horror, one of my challenges was the reader’s identification to the characters and the stories. I used the family theme because growing up, you’re mostly surrounded by your parents and siblings, and since this collection is aimed at young adults, I wanted them to identify early on with the situations and what the main characters went through.

AS: For the stories inspired by dreams, what did you do to go from subconscious weirdness to a cohesive narrative?

AM: Death Song’s first bathroom scene is a dream I had 3 or 4 years ago that left a deep imprint on me. That’s how I came up with a killer mermaid, this unfocused image of a gloomy woman wanting to eat my soul before escaping through the tub’s drain. We Left at Night’s opening scene with shadows moving and the dread of leaving everything you know and love behind was also a beat by beat replica of one of my dreams. My dreams are uber real, which makes my reality a little more bearable.

AS: How is the state of genre, these days? What do you perceive happening to dark horror and YA, two categories in which you fit in?

AM: Well, it is strange to go into an actual bookstore and find horror/fantasy/sci-fi shelves half-empty of titles and then shop on the internet and find that best sellers are actually these exact genre books, selling in eformats. Does it mean traditional publishing doesn’t know what people want? Maybe, but it also means that virtual bookstores give access to genres that are harder to find, which I think is great.

Whatever trend traditional publishing is trying to create will guide the major retailers’ sales, but I doubt people who seek specific stories will be influenced by what’s on the actual bookshelves, and they’ll eventually find it elsewhere. The publishing world is changing so fast and so much, I can’t wait to see what will happen next and how it will influence writers in their career choices.

AS: Is these still a stigma to self-publishing/small presses?

AM: I’d be lying if I said I don’t want to see a hardback with my name on it, but I won’t die if it doesn’t happen – and most writers I know feel the same. The great thing about what’s happening right now is that you can have both: the great feeling of holding a hard cover and making a living by selling ebooks through self-publishing or small presses. That’s the best thing: you can have both, now.

I think the mentality about self-publishing has changed since success stories like Samantha Young and Amanda Hockings have been popping all over the place. It just proves that readers don’t see self-publishing as a stigma, that maybe only writers and traditional publishers view it as such.

AS: Where will you be in five years?

AM: I’d love to be in the UK, on a rocky, cold beach staring at the raging sea whilst sipping tea and writing my next novel. To actually have the luxury to write all day without the need of a job is the ultimate fantasy. That and a hardback with my name on it, of course.

AS: Next project you’re working on?

AM: Girls & Aliens, a sci-fi collection of novellas, quickly followed by Girls & Ghosts. Then, it’s up to the stars, really. Maybe a French novella about Hiroshima, maybe an indie-drama script, maybe my YA thriller Killer Girl or my SF Rebel – who knows? I certainly don’t:)

AM: Keep writing (as I remind myself everyday). 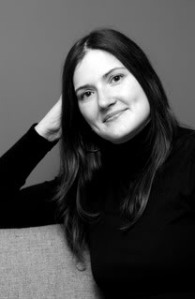 YA and horror writer, Anne Michaud

She who likes dark things never grew up. She never stopped listening to gothic, industrial and alternative bands like when she was fifteen. She always loved to read horror and dystopia and fantasy, where doom and gloom drip from the pages.

She, who was supposed to make films, decided to write short stories, novelettes and novels instead. She, who’s had her films listed on festival programs, has been printed in a dozen anthologies and magazines since.

She who likes dark things prefers night to day, rain to sun, and reading to anything else.

The winner will be announced during the LIVE CHAT on release day, April 30th at 9PM east http://www.darkfuse.com/events.html